For pedigree and more information about Aeron Click Here 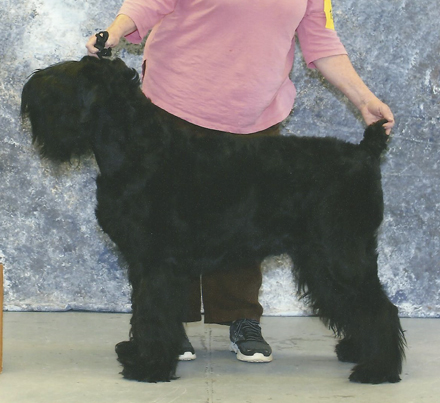 Aeron is from the litter between Riki and Igor, (Caraul Taras Sarja).

She earned her AKC championship from the Bred-By Exhibitor class and was Best Bred-by Exhibitor at the 2012 Eukanuba show. She finished her AKC Grand Championship at 20 months being owner-handled to many of her points. She is also a UKC Champion and Grand Champion, being the third bitch to ever hold this latter title. In IABCA she holds her Ehren title. She is a multi-group winner and placed in IABCA and UKC shows, and has a Reserve BIS from IABCA.

While showing in multiple conformation rings, Aeron also finished her RN, RA, RE and RAE before she was a year of age. She has her BN and CD in regular obedience and holds a URO 1 & 2 from UKC. She also has her Canine Community Citizen certificate, her BHI (Basic Herding Instincts certificate) and her TT from the American Temperament Testing Society. She also has her Canine Good Citizen (CGC), her Canine Community Citizen (CGCA), and her Urban Dog (CGCU) certificates.

At the age of 8, she came out of retirement to earn her Rally Master title and went on to become the first Black Russian in history to earn a performance championship in just four months.

Aeron has passed all of her health checks and holds a CHIC number for hips, elbows, heart, eyes, and patellas. She is also clear on HU and JLPP.

Aeron is the personification of the type of dog Queens Over seeks to breed – beautiful, a good willing worker that is healthy and can produce.

See what the judges are saying about Aeron