For pedigree and more information about Macha Click Here 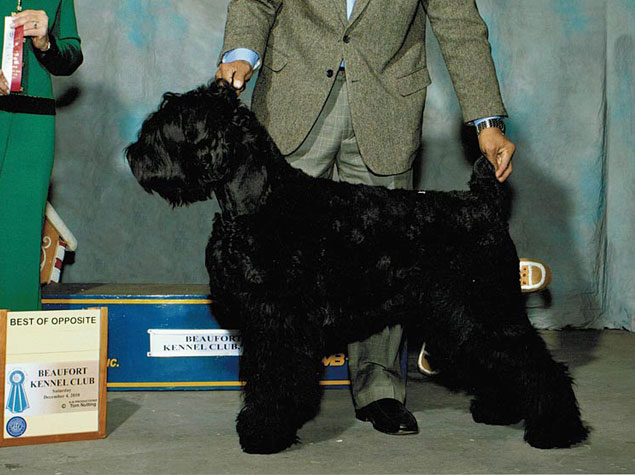 Macha loves to work. She has her RN, RA, RE, RAE and CD from AKC, her URO 1, 2 and 3 from UKC. She is also one of the first Black Russians to earn a CA – Coursing Ability title and has her BHI (Basic Herding Instincts Certificate). She has also earned her Carting Starting & Carting Intermediate titles along with a High in Trial.

Macha has passed health checks on elbows, patellas, heart and eyes. She is also cleared for JLPP.

In her first litter born in June, 2012, she has five champions and three AKC Grand Championships. Six of her puppies hold multiple IABCA championships and one has a UKC championship and Grand Championship. In the working arena, six of the babies have Rally (one has a RAE) Novice titles, one has earned an RAE title, one has a URO 2 title, 7 have Canine Good Citizen certificates or CGCAs, and 7 have TTs from the American Temperament Testing Society, 1 has earned a carting title and two have BHIs (Basic Herding Instincts Certificates). This beautiful litter is making us proud and they demonstrate Macha’s success in the whelping box. They also made Macha Top Producing Black Russian Terrier Dam for 2014.

The Black Russian Terrier Club of America has also awarded Macha the Versatility Dog Award—only the third dog to be so honored.

Macha’s second time in the harness