For pedigree and more information about Nike Click Here 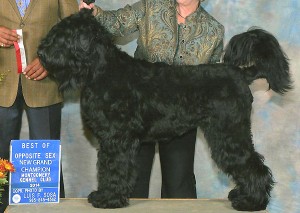 Nike is the new imported Guardian Girl at Queens Over.  She came from Russia when she was ten weeks old, and since coming here, she has taken the American rings by storm!  She was a IABCA Ch. at three and a half months, got her first AKC points by going Best Opposite Sex over three specials bitches at six months and one day of age and was Best of Winners for two more points the next weekend at six months and one week.  That same weekend she finished her Rally Novice title in three straight trials with class placements each time.  The next weekend – at six months and two weeks – she finished her UKC championship in four straight shows going Best of Breed three of the shows over adult Black Russians that already had points toward their AKC championship or had finished their championships.  She again finished her UKC rally title – URO1 – in three straight trials with class placements for each leg.  She finished that weekend by passing her Canine Good Citizen title.  She also passed her Basic Herding Instincts test at just four months. She went on to earn her UKC Grand Championship at 9 months and her AKC Grand Championship at 12 1/2 months; owner-handled for both. She was also on IABCA Best in Show winner at 10 months and went on to win the Grand Seiger award which is the Best of All Best in Show winners. She is one of only two bitches & four BRTs total to ever win this award. She has also obtained her Rally Advanced Excellent and URO2 titles as well as her Companion Dog title. Nike is also certified as a mobility assistance service dog.

Nike has passed her hips, elbows, heart, patella, and eye exams and is clear for JLPP and she is N/HU on the HU gene. Nike also has her CHIC number from OFA.

Nike will be back in the ring after she demonstrates her ability in the whelping box.