For pedigree and more information about Riki Click Here 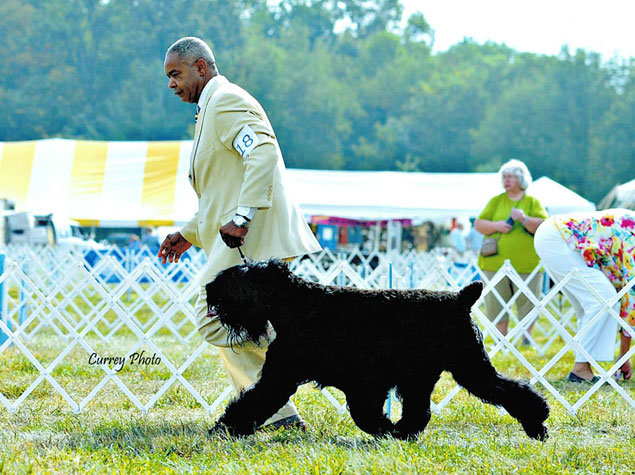 Riki was the girl who “started it all.” She was & still is one of the most titled Black Russian Terriers in the United States. She earned her Rally Novice, Rally Advanced, Rally Excellent, Rally Advanced Excellent and Companion Dog title at the same time as finishing her AKC, UKC and IABCA Championships – all owner – handled. She also earned her RAE2, URO1,2 & 3 and her CDX while competing in Best of Breed competitions for a spot in the top ten Black Russians in the United States. She finished her AKC Grand Championship in only 9 weeks and was one of the top 10 Black Russian Terriers for 2010. Riki was also Best of Opposite Sex at the 2010 BRTCA National Specialty, the first Americanbred Black Russian to earn top honors at any national specialty. She passed her Temperament Test at 18 months of age and also has her Basic Herding Instincts Certificate. Riki also earned her UKC Grand Championship in five straight shows winning 5 Best of Breeds, 4 Groups and a Best in Show along the way.  Riki is the first bitch and second Black Russian to ever attain the UNC Grand Championship.

Riki has OFA certification on elbows, patellas, heart and eyes and is not affected by HU and she is also clear of JLPP. Riki’s first litter earned her the honor of Top Producing Black Russian Terrier Bitch for 2012.  Those babies are now 4 and include 2 AKC Grand Champions, 5 AKC Champions, 2 more dogs with points toward their AKC championships, 8 dogs with multiple IABCA championships, 1 UKC champion, 1 UKC Grand Champion, a wide variety of obedience and working titles among 7 different dogs, 7 CGCs, 2 CGCAs, 6 TTs from the American Temperament Testing Society and one with a Basic Herding Instincts Certificate (BHI).  She also has 3 Champion grandchildren & 2 Grand Champion grandchildren all with working titles. Dogs from this litter are also carting, doing agility, dock diving, schutzhund, tracking, and nose work.

Riki has multiple group placements wins at AKC, UKC and IABCA shows. She is a multi-Best in Show Winner at IABCA & UKC shows, and a Grand Seiger at IABCA, as well as a two-time Gold Cup Best In Show winner. She also has a Specialty Best in Show win and a Rally High in Trial from UKC competition. She is one of only 2 female BRTs to ever win the Grand Seiger award (Nike is the second!). Riki showed up until a couple of months of her death and obtained 4 veteran Best in shows, 2 all-breed Reserve Best in Shows and a Gold Cup Best in Show shortly before she left us. She will always be with us through her offspring.

Posthumously she was awarded the Black Russian Terrier Club of America’s Versatility Dog Excellent award—the first only such recipient through 2015.
Go to Top