For pedigree and more information about Ulyana Click Here 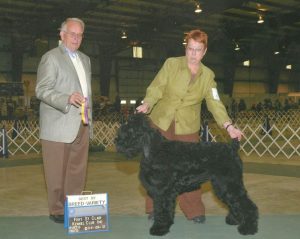 She also excels in the working arena. She holds her RN, RA, RE and RAE, her CD and her URO 1, 2 & 3. Her scores have been outstanding and she has many perfect scores. Ulyana also has her Canine Good Citizen certificate, Canine Community Citizen Certification, and her TT from the American Temperament Testing Society. She was High Combined in her Rally at the 2015 National specialty. She is now working on her CDX certificate, Urban Canine Citizen Certificate (CGCU).

Ulyana has her CHIC number from OFA having passed her hips, elbows, patellas, heart and eyes. She is also clear for HU and JLPP.

Her first litter was born in May, 2013 and has 4 champions and 1 other with AKC points. Four have IABCA Championships, while six of the babies have Rally titles including one with RAE, 4 have TTs from American Temperament Testing Society, 1 has a CGC, and 1 has both a CGC and a CGCA and has 4 AKC Grand Champions & 1 AKC boy who is pointed toward his championship.

Ulyana has, in true Queens Over style, demonstrated her abilities in the Conformation Ring, the working arena and the Whelping Box.